If you follow me on Instagram, you already know that I spent much of our first week of voluntary self-isolation baking, but I thought I’d do a quick round-up here. Because both baking and eating baked goods are good stress relief. 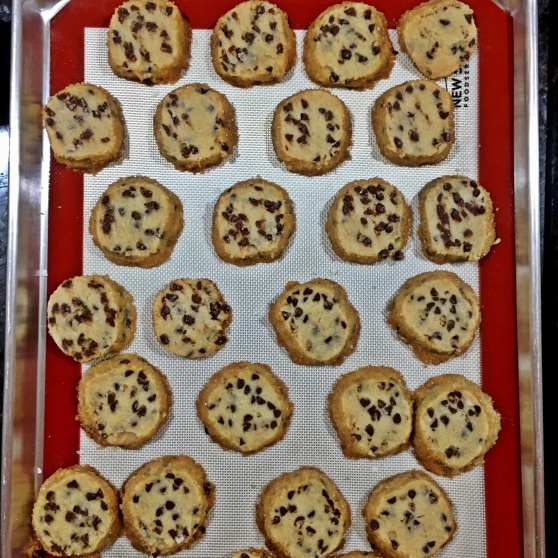 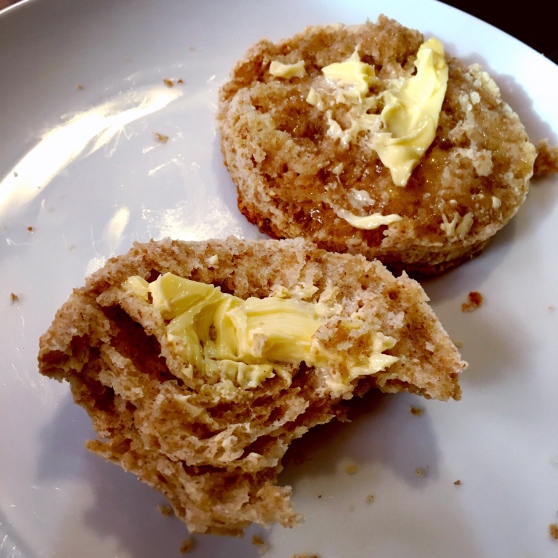 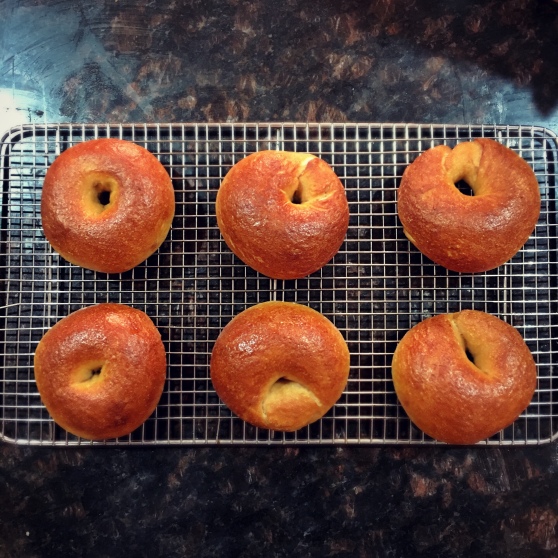 I hope that you’re keeping safe and well, and finding your own ways to deal with these difficult days. 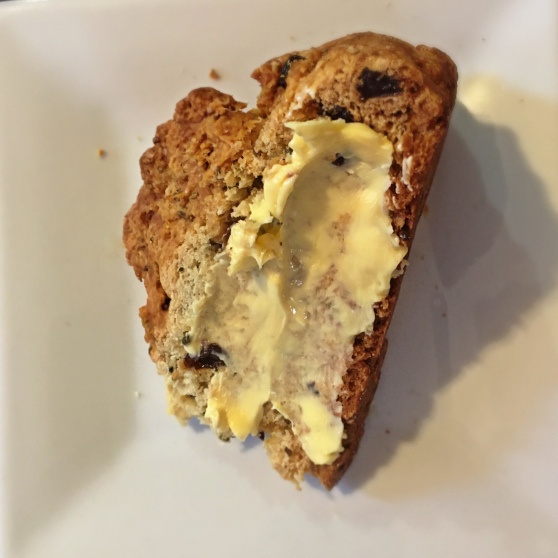 Both of my grandmothers were the children of immigrants — from Ireland on my mom’s side, and from Italy on my dad’s — so when I was looking for alternate ways to flavor my bread, I decided to try anise seeds. It worked better than I expected, and now this is the version I make for Saint Patrick’s Day every year. 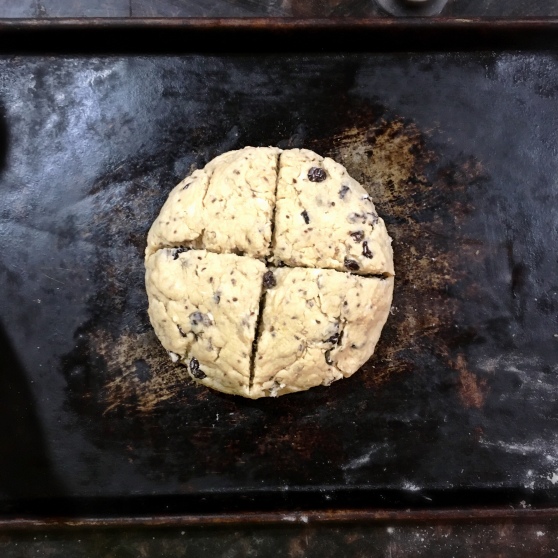 3. Add the currants and anise seeds.

3. Mix buttermilk and egg and add to flour/butter mixture.

4. Knead briefly, turn onto a baking sheet, and shape into a dome around seven inches across.

5. Slash a deep X across the top of the loaf. 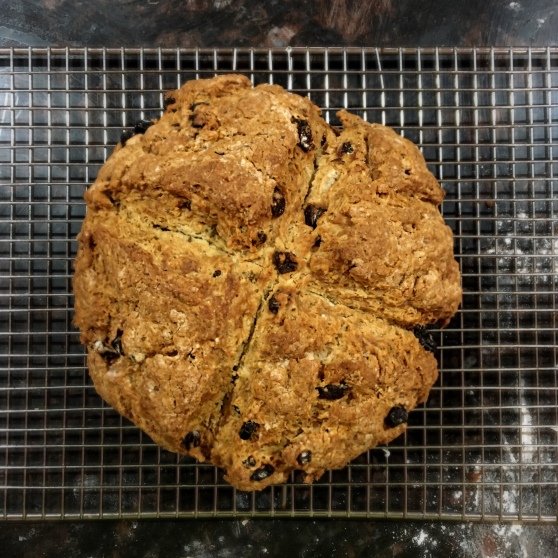 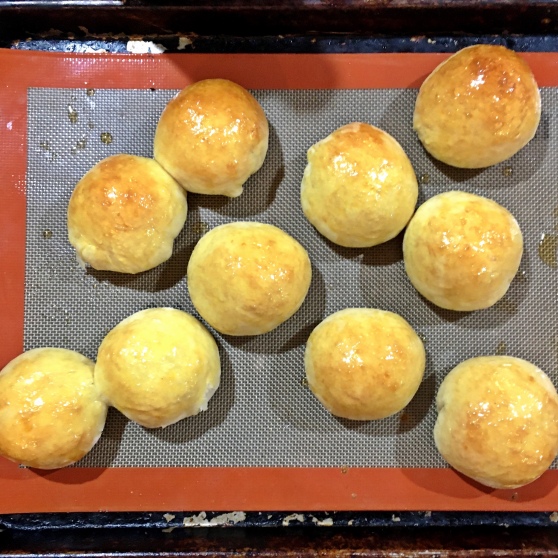 So, it’s been a little while! The short version, for those of you not following me on social media, is that I injured my knee right before the holidays, and have been resting/recovering for the past two months. Oof! I’m only just back on my feet, and I’m still not up to doing a lot of cooking yet, by myself. Fortunately, my son volunteered to help me make these delicious buns from Asian Dumplings by Andrea Nguyen.

These are a pretty simple yeast dough, and you can make the filling ahead of time, so if you wanted to throw them together for a snack, or a weeknight dinner, that would be very doable. We ended up making two batches, one with a curried chicken filling, and one with a potato and cheese filling. 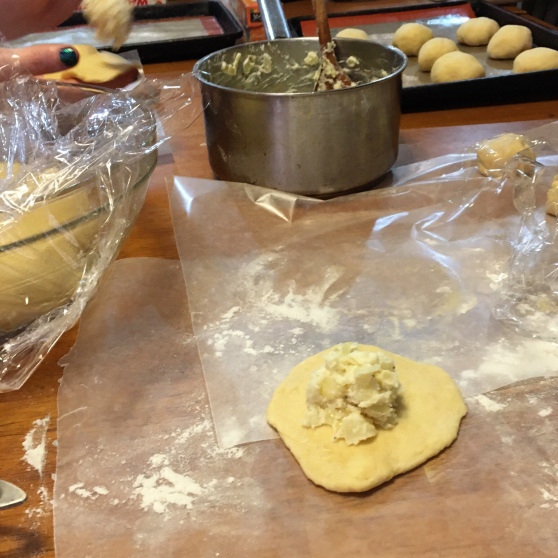 Filling
You’ll need about 1 1/3 cups of whatever filling you choose. If you’d like, I can do a follow-up with fillings, but you can go with just about anything, just make sure it’s fully cooked, and cooled.

1. Put the butter and the milk in a saucepan and cook over medium heat until the butter is melted. Set aside to cool for 5 minutes.

2. Whisk the water and egg into the milk mixture.

3. Combine the sugar, flour, yeast, and salt in a food processor (or in a bowl if you want to do it by hand). Pulse a few times to mix, then slowly stream in the wet ingredients while running the processor (or, while stirring) until you have a smooth, slightly sticky dough.

4. Oil a clean bowl, and put the dough in it to rise, covered, for about 45 minutes.

5. After the dough has risen, divide it into 16 or 32 pieces, covering them up when you’re not working with them.

6. To fill the buns, roll each piece out into a circle, 3 1/4″ diameter for regular, 2 1/2″ for mini. Lightly flour as necessary to keep from sticking. Place 4, or 2 teaspoons of filling in the center of the round, gather up the edges and pinch them together, sealing the filing inside. Flip over, and round them off as needed. Place all the filled buns on parchment-lined baking sheets, cover, and let rise for 30 minutes.

7. Meanwhile, preheat your oven to 350° F. Right before baking, brush the buns with the egg. Bake for 18 minutes regular, 14 minutes mini, or until a rich, golden brown. Let cool for 5 minutes.

8. Brush the honey mixture on the buns. Enjoy while warm, or refrigerate and reheat for snacks (or eat them cold from the fridge!). 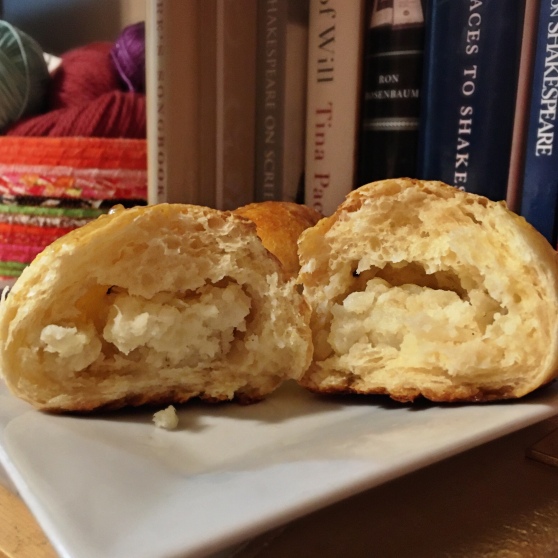 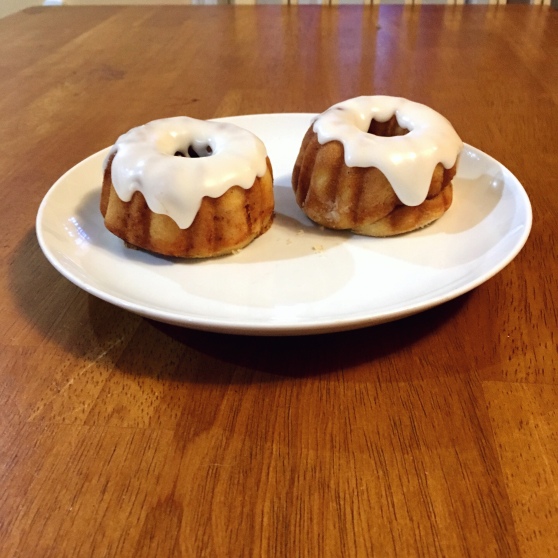 My daughter spent a chunk of her free time this summer playing Skyrim, so, for her first day of school, I made her some sweetrolls to steal. I used the recipe in the Nerdy Nummies Cookbook by Rosanna Pansino, but you could make any cinnamon roll or sweet bun dough and I’m sure it would work. The tricky part is finding two 6-cavity mini Bundt pans, if you don’t already have them. 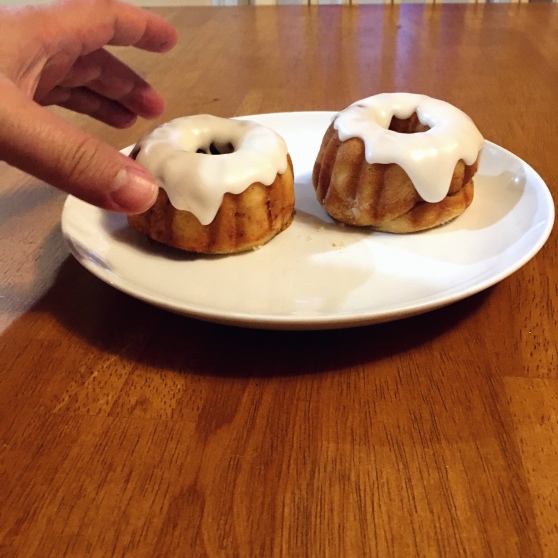 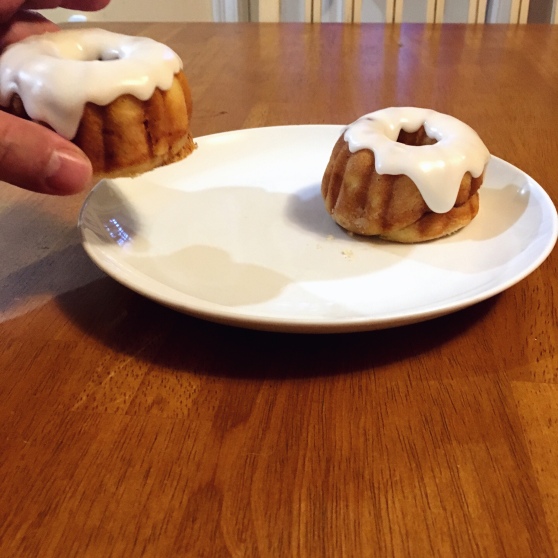 1. In a small bowl, dissolve the yeast in the water. Meanwhile, in a large bowl, beat the butter and the sugar together.

2. Add the egg yolks, one at a time, beating after each addition. Mix in the milk, cardamom, and salt until well-blended (This was the step that mystified me. No matter how room temperature everything is, you’re still just going to get soggy butter chunks.). Beat in the yeast mixture.

3. Add 3 1/2 cups of flour, and mix until well-combined. Knead the dough until smooth, adding more flour if necessary (it was).

4. Place the dough in a large oiled bowl, cover, and let rise until doubled in volume, about 1 hour.

5. On a lightly-floured surface, roll the dough into a 12″ x 18″ rectangle, and brush with the melted butter.

6. In a small bowl, combine the brown sugar and cinnamon. Sprinkle evenly over the dough.

9. Grease your two 6-cavity mini-Bundt pans, and wrap the dough slices around the center tubes. I only had one such pan, so I did half a batch at a time (I had to go to several stores looking for an appropriately-sized mini-Bundt pan, and the only ones I could find were $36 each, and I wasn’t prepared for that kind of investment).

12. Level the bottoms of the rolls with a large knife.

13. In a small bowl, combine the sugar, vanilla, and milk for the icing, adjusting with more milk or sugar to get a thick, but pourable, glaze.

14. Spoon over the tops of the rolls, and allow (encourage) to drip down the sides. 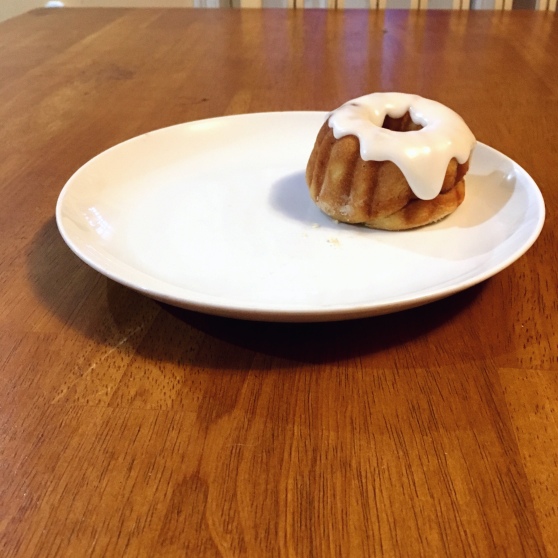 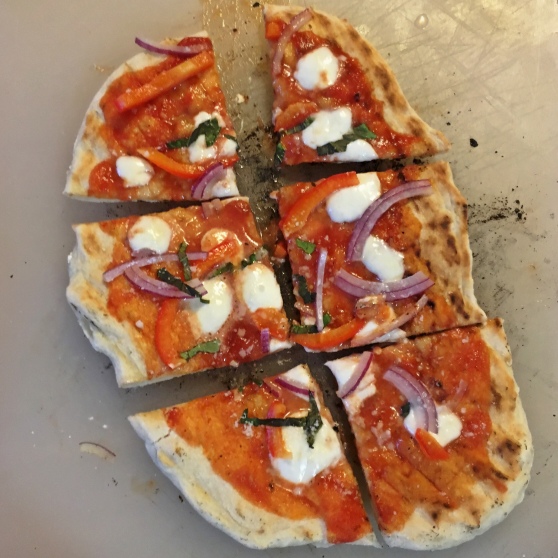 We make homemade pizza fairly often in the winter, but who wants to turn their oven up to 500° when it’s in the 90s? Enter grilled pizza, which, you still have to stand around a hot grill for, but at least your whole house doesn’t get overheated.

I used Bon Appétit’s method for the pizza, but I really don’t like supermarket pizza dough, so I made my own 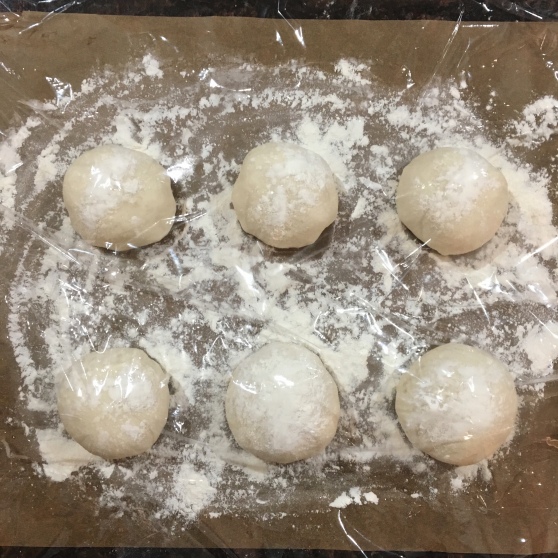 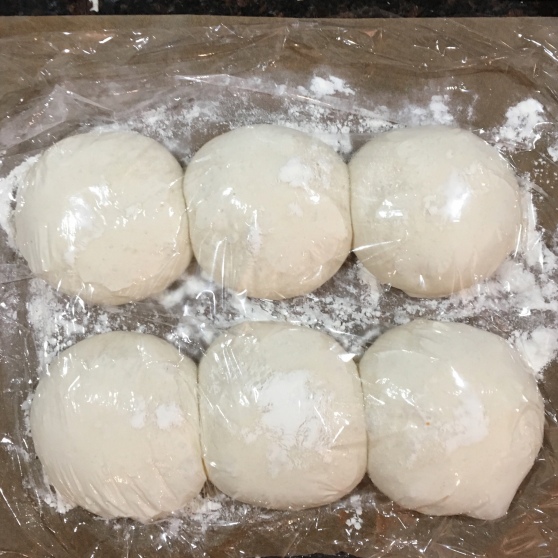 1. Mix the dry ingredients, then add the water and mix until combined. Knead for about five minutes, until the dough comes together, and is soft, but not too sticky, adding more flour as needed.

2. Form into a ball (or as many balls as you’d like pizzas, if you’re increasing the recipe), and place on well-floured surface. Flour the top of the dough, cover, and let rise for two hours, or about tripled in bulk. Then make some pizzas! 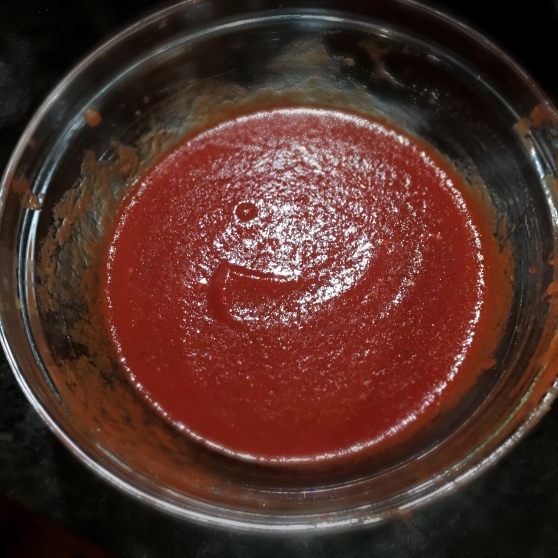 Bonus no-cook pizza sauce recipe: Combine a 28 oz. can of crushed tomatoes (these can be pre-crushed, or you can drain some whole tomatoes and run them through a food mill. You might have to experiment with different brands to get a flavor and consistency that you like) with olive oil, salt, pepper, and a clove or two of minced garlic. Taste and add lemon juice or sugar if the flavor needs adjusting, then let it sit while you’re busy with your other pizza business. 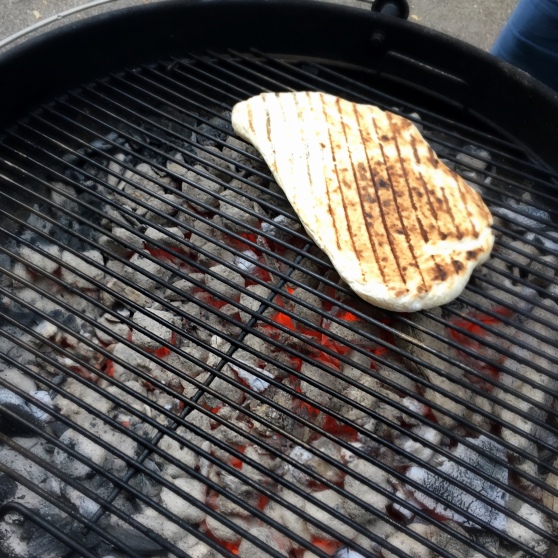 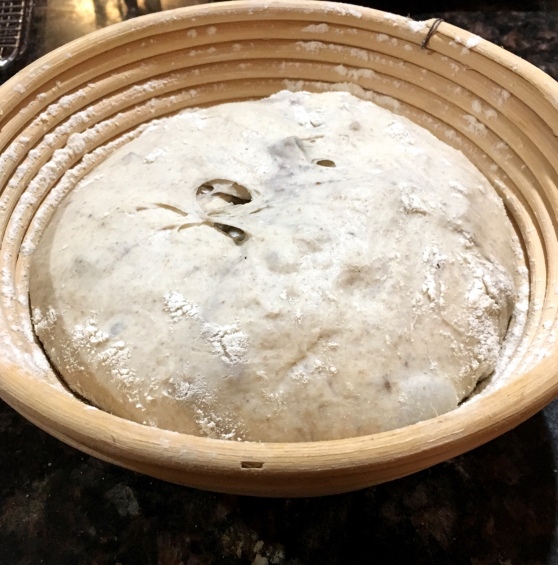 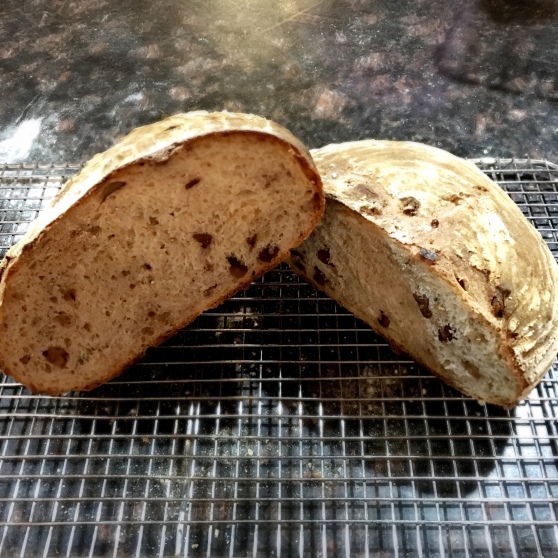 It rose! And the bread (The Pearl’s Walnut Levain from Maggie Glezer’s Artisan Baking Across America) is delicious! The reason it’s a little flat is because I was worried it was going to stick to the proofing bowl, so I stuck my hand in there to pry it out. The bowl was floured adequately, but my hand was not, and the dough got a little roughed up in the process. But, my starter works! 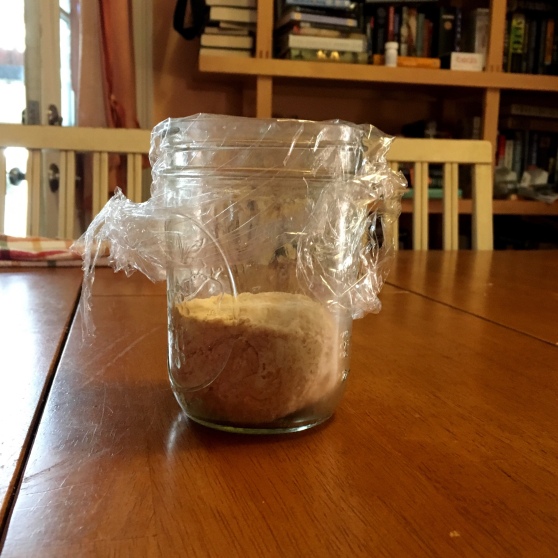 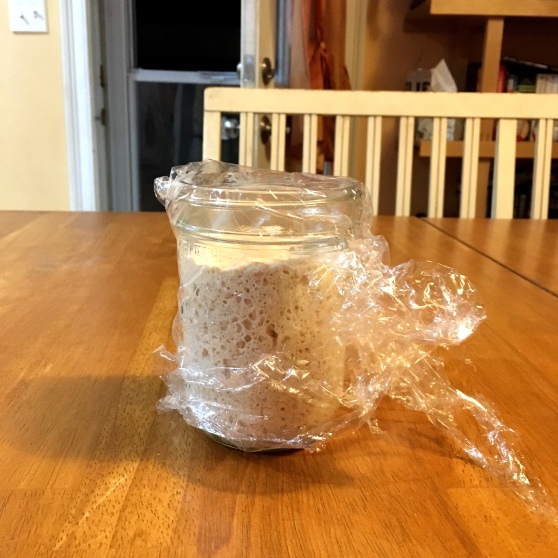 Those of you who have followed me across platforms might remember my slight obsession with Robin McKinley’s book Sunshine, and the description of the cinnamon rolls baked therein. More about that later, but, since I’m just like you guys when it comes to food blogs (and since I’m not doing this to make money anyhow) I’m’a put the recipe first. 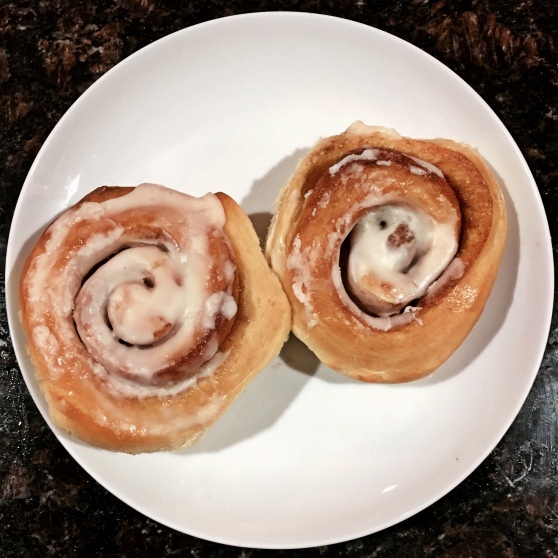 1. Make dough: scald the milk, then remove from the heat and add the butter. Let sit until melted and slighly cooled, then add the water, vanilla, and eggs. In the bowl of a stand mixer (or just a large bowl), mix the flour, yeast, and sugar. Add the milk mixture and stir until combined. Cover the bowl and let rest for 20 minites.

2. Sprinkle the salt over the dough, then knead, either by hand or by dough hook, until it starts to look smooth. If you need to, you can add more flour; the dough can be soft, but it shouldn’t be too sticky. Put the dough in a lightly oiled bowl, cover, and refrigerate overnight (or don’t refrigerate, and let rise for about an hour, until puffy but not quite doubled, you early riser, you).

3. The next morning, take the dough out of the fridge, and let it come to room temp (about 2 hours). Meanwhile, mix the sugars, cinnamon, and salt for the filling.

4. Divide the dough in half, and follow this procedure for each half: Roll the dough out on a lightly floured surface into a 10″ x 16″ rectangle (approximately). Brush half the melted butter over the dough, leaving a half- inch along one shorter end for the eventual seam. Sprinkle with half the cinnamon sugar, then roll up, starting with the short side opposite your seam side. Pinch the seam down to seal, and then cut into 12 equal pieces and place on a baking sheet lined with parchment (note: if you like squishier, close together rolls, instead use a greased 9″ x 13″ pan).

5. Cover, and let rise for an hour, or until the rolls have expanded and gotten puffy. During the last 15 minutes or so of the rise, preheat your oven to 375° F.

6. Bake for 20-25 minutes, or until they are barely browned on top. While they’re baking, you can make the icing by mixing all the ingredients (use the smaller amount of milk, and sift your confectioner’s sugar if it’s chunky) and then adding more milk or more sugar, until you’ve got a fairly thick icing (it should be more spreadable than pourable). When the rolls are done, remove them to a rack, and spread them with the icing. Then you get to eat them! 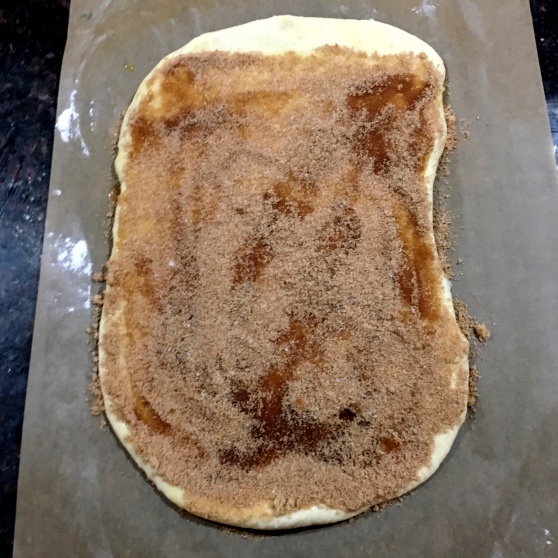 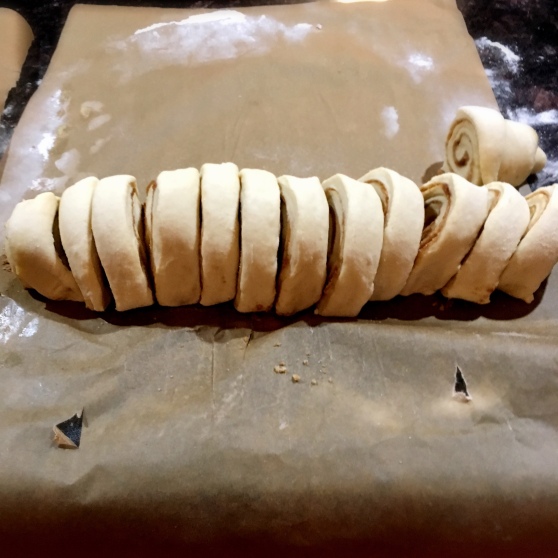 Optional Tangzhong Starter
While I was looking at cinnamon roll recipes to compare them, I found a great recipe on thr King Arthur Flour website that recommends using a Tangzhong starter (read about it here), and it really works well with this recipe. I use 7 1/2 TB each of milk and water, and 5 1/2 TB of flour. Mix those up in a saucepan, heat over medium-high while whisking constantly, until mixture thickens (don’t worry, it’s really obvious). Let cool to lukewarm, and add to your dough with the milk mixture. 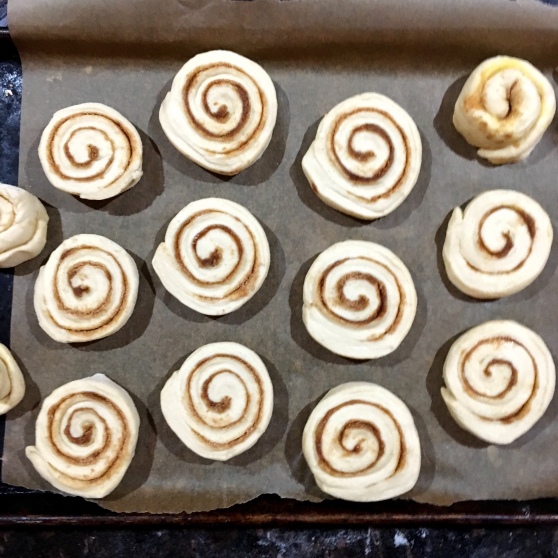 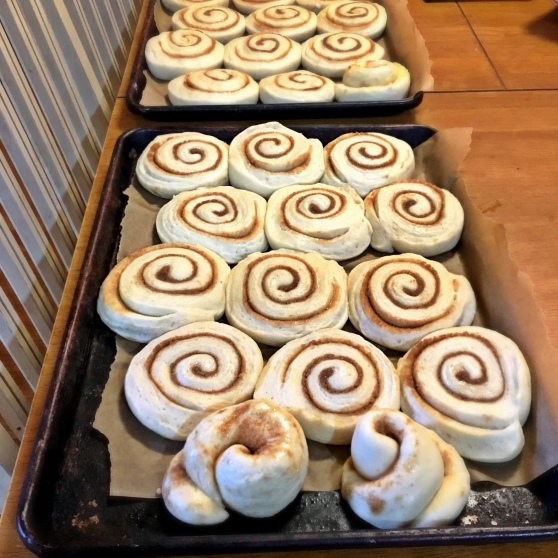 Now that that’s out of the way, let’s talk about how these came about. First of all, if you’re unfamiliar with Robin McKinley’s work: run, don’t walk, to the nearest library or bookstore, and put your hands on a copy of Sunshine, and The Hero and the Crown, and, well, any of her books really, but especially those two. The Hero and the Crown is high fantasy, with gods, ancient dragons, and magic swords, but not much in the way of cooking (unless you count potions of fire resistance). Sunshine is an urban fantasy, featuring vampires, nature magic, and cinnamon rolls as big as your head. The main character, Sunshine, is a baker in a cafe, and those cinnamon rolls are her specialty. Whenever I think about Sunshine, I think about cinnamon rolls, and whenever I think about cinnamon rolls, I think about Sunshine. It’s as simple as that.

There is, unfortunately, no official recipe, although there are a couple scattered LiveJournal posts by the author that contain some hints. So these are a combination of my favorite bits of several cinnamon roll recipes, incorporating those hints, and ending up with just a really delicious treat that I’m glad I don’t have to wake up at 4:00 every morning to prepare. The way I make them they aren’t quite as big as your head, but they’re otherwise exactly what I want in a cinnamon roll. 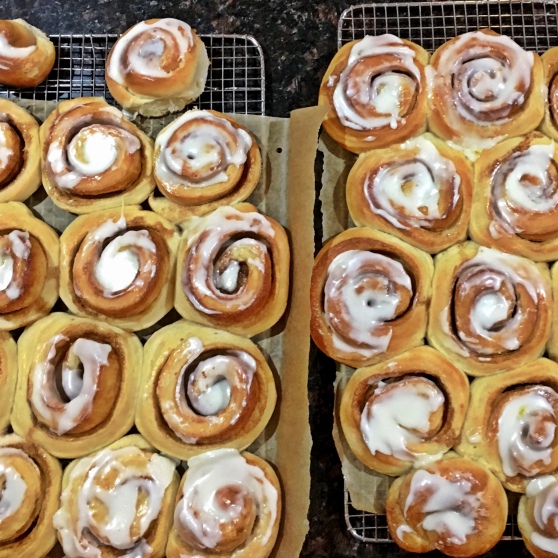